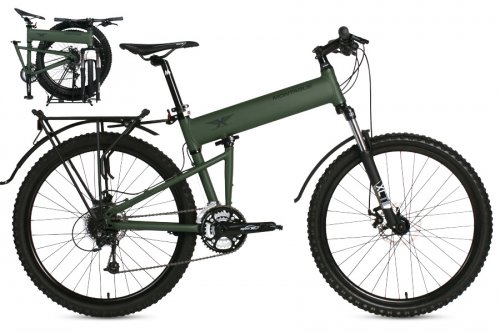 YES INSTOCK finally after a long time away !

The Paratrooper is the original folding mountain bike from Montague. Its patented folding design was developed under a grant from DARPA to allow airborne soldiers to drop out of airplanes and helicopters, and into combat. The Paratrooper offers 24 speeds, front suspension, mechanical disc brakes, and a Rackstand for hauling gear. Known for its durability and load bearing capabilities, this folding bike has also developed a following with everyday commuters and weekend warrior

For 2016, Montague took the strongest folding bikes on the market and redesigned them from the ground up to provide an even better ride, an easier folding experience, and a stunning new aesthetic. Their new folding system, DirectConnect™, provides the following benefits:

• increased stiffness of the frame

• no need for a quick release on the top tube

• automatic engagement of the latch when unfolding

Montague also premiers their Eurobike Award winning RackStand™ on five models in 2016. The RackStand functions as a traditional rear rack with built in fender, but also rotates under the rear wheel to provide these additional benefits: